In 1928, Walter Chrysler launched the De Soto brand, named after the explorer Hernando De Soto, who led the first European expedition into what is now Florida, Alabama and Georgia. De Soto cars were positioned at the lower end of the Chrysler range, to compete with GM’s Oldsmobile and with Studebaker, Hudson and Willys. 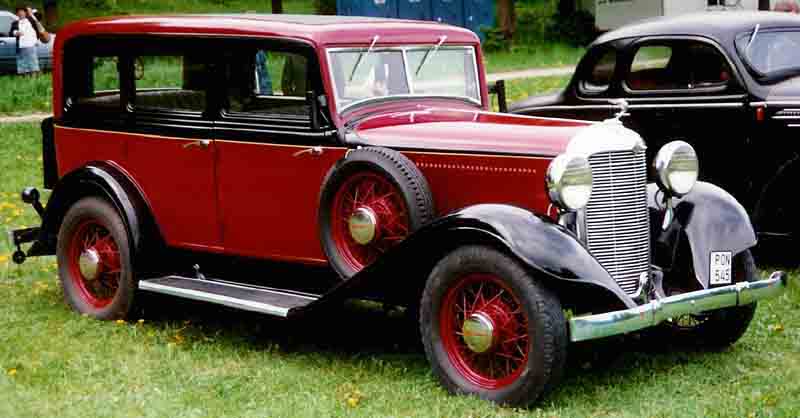 It was a busy year for Chrysler, who also took over the Dodge Bothers business and launched the Plymouth brand as well.

The De Soto brand was launched with a 3.2-litre, side-valve, six-cylinder engine that had rubber mounts. The car also had four-wheel hydraulic brakes. The 1934 De Soto shared Chrysler’s streamlined bodywork, but on a shorter wheelbase than Chrsyler’s Airflow models. It was not a marketing success and was replaced in the following year by the Airstream models. In 1939 came independent front suspension; a choice of two sixes and a column shift.  Vacumatic, semi-automatic transmission was an option on 1941 models.

In 1942 De Soto aped Cord’s design for pop-up headlights: ‘out of sight except at night’  ran the slogan. Post-War De Sotos were basically 1942 deluxe and Custom models, but without the headlight feature and with fender Ines blending into the door panels, a la other Chrysler shapes. The straight-eight gave way to Chrysler’s ‘Hemi’ V8 in 1951. From 1953, six-cylinder models were designated Powermaster and the V8s were Firedomes. V8s outsold sixes by around two to one.

The tail fin craze was adopted by Chrysler in 1955 and De Sotos scored big ones. The six was dropped from the De Soto lineup, other than for the thinly-disguised Diploma model, based on the Plymouth. In Australia the De Soto Diploma coupe utility was launched in 1956.

The De Soto Adventurer was introduced in 1956 as a high-performance coupe, along the lines of the Chrysler 300 and powered by the 5.6-litre Hemi.