The Stanley Motor Carriage Company was an American manufacturer of steam cars between 1902 and 1924, but the identical twin brothers Francis Edgar (F E) and Freelan Oscar (F O) had already produced more than 200 steam-powered cars of their original design in 1897-99. They then sold the manufacturing rights to to Locomobile.

Before their foray into car manufacturing, the Stanley twins invented a process for coating photographic dry plates that revolutionised photography and netted them a fortune when they sold the process to Eastman Kodak. The money allowed them to pursue their passion for self-propelled vehicles and they became famous for the speeds achieved by their steam-powered automobiles.

By the winter of 1897 the Stanley brothers had built three cars – two runabouts and a Surrey – and FE entered a roadster for a race on the Charles River cycle track, soundly defeating a petrol de Dion, an electric Rider and a steam-powered Whitney.

Orders powered in and the brothers soon began making 200 cars. In 1899, F O and his wife Flora drove one of their cars to the top of Mount Washington in New Hampshire, the highest peak in the north-eastern United States. The 7.6-mile (12.2km) long Mount Washington Carriage Road has an average gradient of 11.6-percent.

The ascent took more than two hours and was the first achieved by a car.

The Stanleys sold the rights to this early design and in 1902 they formed the Stanley Motor Carriage Company. Early Stanley cars had light wooden bodies mounted on tubular steel frames with full-elliptic springs. Steam was generated in a vertical fire-tube boiler, mounted beneath the seat, with a vaporising petrol – later, kerosene – burner underneath.

The boiler was reinforced by several layers of piano wire wound around it, which created a strong but relatively lightweight shell. In early models, the vertical fire-tubes were made of copper and were expanded into holes in the upper and lower crown sheets. In later models, the installation of a condenser caused oil-fouling in the expansion joints and welded steel fire-tubes replaced the copper ones.

In the early years of the 20th century the competition between battery-electric, petrol internal combustion and steam-powered vehicles was intense and there was no clear-cut leader, because all power modes had their drawbacks.

Some of Stanley’s competitors highlighted the risk of an exploding boiler, despite the fact that no Stanley boiler had exploded then – or since, for that matter.

To counter this attack, the Stanley company produced a series of advertising campaigns pointing out the risks of the ICE (internal combustion engine) they termed: ‘the internal explosion engine’. The Stanley advertising slogan was: ‘Power – Correctly Generated, Correctly Controlled, Correctly Applied to the Rear Axle’. The Stanley boilers were reasonably safe, being fitted with pressure relief valves and even if these failed, any dangerous over pressure would rupture one of the joints long before the boiler shell could burst. Also, the resulting water leak would simultaneously reduce boiler pressure and douse the burner.

Downsides of the steam car that Stanley found more difficult to counter were its need to carry a large water tank that needed replenishing every 50-80km and the 20-25-minute boiler warm-up period before the car could be driven. The first-design Stanley Steamer engine was a simple-expansion type that had two double-acting cylinders, mounted side-by-side and equipped with slide-valves. Drive was transmitted directly by chain from the crankshaft to a rear-mounted differential. There was no need for a transmission or clutch, because steam engines, like electric motors, deliver maximum torque at lift-off.

To avoid infringing the patent covering the design they had sold to Locomobile, the Stanley brothers developed their post-1902 model with a different twin-cylinder engine, geared directly to the rear axle.

A Stanley Steamer set the world record for the fastest mile in an automobile (28.2 seconds) in 1906, with Fred Marriott at a the wheel. The Beetle (alias Wogglebug) was long, low and streamlined, and powered by a standard 20hp steam engine, but with a larger boiler.

Their 1907 range introduced the most coverable of Stanleys, the Gentleman’s Speedy Roadster, available with three different engine sizes and capable of over 75mph in short bursts.

The compact Stanley engine ran at high steam pressure, with the 1912 10-horsepower model’s boiler having the safety valve set at 650psi (pounds per square inch) {4.5MPa}. The burner was set to cut back automatically when pressure reached 500psi (3.4MPa).

The 10hp model had 83mm bore and 108mm stroke, and the 20hp engine, 102mm bore and 127mm stroke, with extensive use of ball bearings and around 13 moving parts in the engine. The 1909 Stanley Model Z nine-seater was fitted with a 26-inch-diameter boiler, stacked with 999 copper tubes. (Incidentally, Stanley boilers were still in production in 2016 and cost up to US$20,000, but if used correctly, they last 25 years.)

F E Stanley’s son, Raymond, received a degree in automotive design from Harvard University and one of his creations was the 1912 Stanley Special roadster that came to a sticky end when its steering gear failed, catapulting Raymond and his passengers through a barbed wire fence, with the front wheels stopping in a pond. Fortunately, there were no serious injuries, but Raymond’s father nonetheless ordered the car be dismantled. 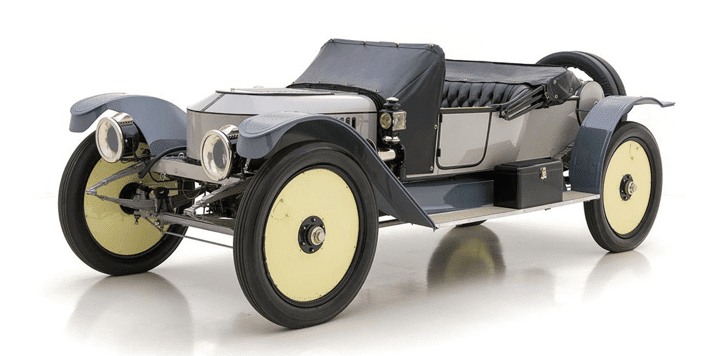 This landmark model inspired renowned USA Stanley collector and restorer, Brent Campbell to build a replica. The Special Roadster was completed in 2016 and celebrated Independence Day 2017 by driving up the Mount Washington Auto Road, with car nut Jay Leno at the wheel.

When Stanley Cars had moved the steam boiler to the front of the vehicle, in 1905, owners dubbed the design ‘coffin nose’. When a condenser was added, in 1915, to reduce water consumption, by recycling rather than wasting spent steam, it was positioned where an ICE-powered car had its coolant radiator.

Later models had aluminium coachwork that resembled the internal combustion cars of the time, but they retained steam-car features by having no transmission, clutch, or driveshaft. They also had a fully sprung, tubular steel frame. Stanley Steamers were fitted with bodywork that could seat up to12 people and were used to carry passengers from the train station up to the Stanley Hotel (which is still standing) in Loveland, Colorado. Their size and the fact that almost no other car of the time could make it up the hill made them a popular choice.

In 1917, the brothers handed their auto company over to F E’s sons-in-law and their cousin, and to company production manager, Carlton Stanley.  However, Chicago investment group Prescott Warren took over the company in 1918.

F E Stanley died a year later, when he crashed while attempting to avoid a collision with farm wagons traveling side-by-side across the roadway. F O Stanley, who suffered from tuberculosis, moved to Colorado for his health and lived to be 91. After World War One, the fuel efficiency and power delivery of internal combustion engines improved dramatically and wide adoption of the electric starter instead of the hand crank, led to the rise of the gasoline-powered automobile, which also was much cheaper.

Stanley suffered a period of decline and technological stagnation. Production specifications show that no model with a power output of more than 20hp was produced after 1918.

Also, mass produced ICE cars were now available at much lower cost. For example, a 1924 Stanley 740D sedan cost US$3950, compared with less than US$500 for a Ford Model T.

The smaller scale of merchandising, lack of effective advertising and the general desire of motorists for higher speeds and faster starting than offered by Stanley vehicles were the primary causes of the company’s demise.

The factory closed permanently in 1924.

Stanley cars of all generations were produced between 1897 and 1924. During that time, the American manufacturer produced nearly 11,000 cars.