Douglas was a British motorcycle manufacturer from 1907–1957, based in Bristol, UK. Douglas was known for its horizontally opposed, twin-cylinder powered road and racing bikes, and as a manufacturer of speedway machines. Barter built a single-cylinder bicycle engine between 1902 and 1904, and then implemented the Fée (French for ‘fairy’) bicycle engine system. The first powered bicycle appeared in France in 1897, powered by a DeDion Bouton engine, so the original Fée concept may well have originated there.

It’s highly likely that Barter opted for the Fée, flat-twin engine design to eliminate the vibration of his first single-cylinder bike. An opposed-cylinder, ‘boxer’ engine has good primary balance, but does incur a ‘rocking couple’ caused by relative piston movement. (The beginnings of the flat-twin engine were in 1896, when Karl Benz obtained a patent for the design.)

The benefits of using a flat-twin engine, mounted with the crankshaft running perpendicular to the frame, with the cylinders being aligned with the frame, are a low centre of gravity and the ease of fitting a belt-drive or chain-drive. However, the downsides are better cooling for the front cylinder than the rear cylinder and a long wheelbase, to accommodate the length of the engine.

Because it was fitted high-up in an existing bicycle frame, the Fée’s 200cc, flat-twin engine  had a drop-down chain drive to a clutched countershaft that used a drive belt to power the bicycle’s rear wheel. (For security, the existing pedal crank and chain drive were retained!)

The 1904 Fée was the earliest flat-twin motorcycle engine, of which there had since been many copies. Production began in 1905 and ‘Fée’ was anglicised to ‘Fairy’ shortly afterward. Manufacture of the Fairy was taken over by the Douglas Engineering Company, when the Light Motors Company folded in 1907.

Later in 1907, Douglas modified the frame design and lowered the engine, to eliminate the need for a drop-down chain drive and countershaft. The rear wheel belt-drive system operated directly from a larger, 350cc engine.

At the 1907 Stanley Show Douglas displayed a V4-engined prototype, with automatic inlet valves, and two-speed drive, but for the 1908 show only an updated flat-twin that was on show, with even lower engine position. 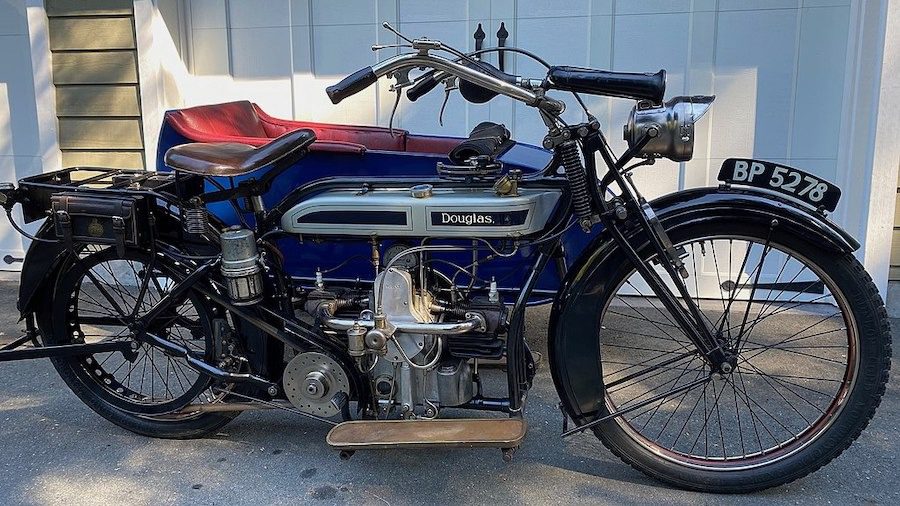 The frame was modified to make the engine still lower, by 1912 and the automatic inlet valves were replaced by mechanically operated valves.

During World War I Douglas was a major motorcycle supplier, making around 70,000 motorcycles for military use.

The larger engine had pressure lubrication of bearings and cylinders and a glass window in the sump, to show oil level. Douglas also made the Williamson Flat Twin for the Williamson Motor Company to use in their motor cycles. This was an 8hp engine of 964cc that was water cooled or air-cooled.

Douglas’s traditional layout of a flat-twin engine mounted with its cylinders parallel to the frame had been copied by several motorcycle manufacturers. In the United States, Indian made its lightweight Model O from 1917 to 1919 and Harley-Davidson made a middleweight Model W from 1919 to 1923, both brands using the Douglas layout.

Several German manufacturers began making flat-twin motorcycles and BMW made its M2B15 flat-twin proprietary engine available in 1920. The M2B15 was a reverse-engineered Douglas motorcycle engine that was owned by a BMW factory foreman. In 1921, Douglas employed a form of disc brake on the front wheels of its overhead-valve sporting models. (The first caliper-type automobile disc brake had been patented by Frederick William Lanchester in 1902.)

Patented by the British Motorcycle & Cycle-Car Research Association, Douglas described the RA design as a ‘novel wedge brake’ working on a ‘bevelled hub flange’. This design reversed the normal operation of a friction pad pressing on a metal surface, because the disc was surfaced with friction material and the cable-operated ‘pad’ was actually aluminium.

The Douglas brake was operated by a Bowden cable and both front and rear brakes of this type were fitted to the machine on which Tom Sheard rode to victory in the 1923 Senior TT.

Douglas had success in motorcycle racing and trials events. Twelve Douglas motorcycles were entered in both the Junior TT and Senior TT and another three were in the Sidecar race during the 1923 TT. This gave Douglas their first senior Isle of Man TT victories.

Tom Sheard won the 500 cc TT and they won the first ever Isle of Man Sidecar race with Freddie Dixon ,while Jim Whalley had the fastest lap in the Senior TT with a time of just under 60mph during a wet race. A Douglas also placed third in the Junior TT that year. These motorcycle designs were gradually increased in size and power, with 500cc and 600cc engines fitted to the DT5 and DT6 Dirt Track models in the late 1920s and early 1930s. The engines had hemispherical heads and short, rigid, forged crankshafts. They dominated dirt track racing for around three years. In 1929, the most successful dirt racing year, 1200 Dirt Track motorcycles were sold. The late twenties saw success in Austria (1929 Austrian TT was won by Rudolph Runtsch) Post war the factory had little road racing success however a Mark 3 did win an outstanding victory in the 1950 Bemsee ‘Silverstone Saturday’ beating all the Velocettes, Nortons and BSA Gold Stars.

Douglas gained significant attention in 1932–1933 when Robert Edison Fulton Jr circumnavigated the globe on a 6hp Douglas twin, fitted with automobile tyres. Fulton wrote a book on his adventure, titled ‘One Man Caravan’.

The Endeavour, 494cc, shaft-drive model came out in 1934. This was a flat-twin, but for the first time Douglas fitted it across the frame instead of in-line. Like other companies during the Great Depression, Douglas was struggling, and attempting to diversify into other modes of transport. In 1935 Douglas was taken over by BAC, Bond Aircraft and Engineering Company.

Motorcycle production continued into World War II and was extended to generators.

During the post-war slump, in 1948, Douglas was in difficulty again and reduced its output to only 350cc, flat-twin models. The T35 was one of the first production motorcycles to be fitted with swinging arm rear suspension and, in the case fo the T35,  the springing medium was a longitudinal torsion bar.

The 1955 350cc Douglas Dragonfly was an across-the-frame flat-twin, but it had chain rear drive rather than more logical shaft drive. Fewer than 1500 were produced.

The Westinghouse Brake and Signal Company Ltd bought out Douglas, but production of Douglas Motorcycles ended in 1957. Douglas continued to import Vespa scooters into the UK and later imported and assembled Gilera motorcycles.